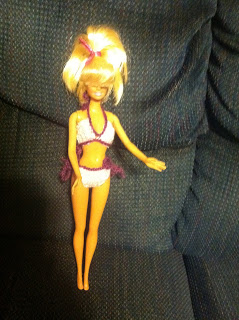 When I was in California for the birth of my second granddaughter, I was able to fulfill a promise I had made a year ago.  My oldest granddaughter needed bathing suits for her Barbies,  apparently, you can’t just buy them. When I was little, all Barbies came in a bathing suit and you later purchased outfits for her. Now Barbies are dressed for various activities or careers such as a doctor or going to a ball.  So sadly my granddaughter’s Barbies has nothing to wear to the pool or the new Barbie Jacuzzi.  I allowed everything but this promise to get in the way until  I returned to California this Thanksgiving and we made every single Barbie a bikini.  What my daughter and I didn’t realize is that my granddaughter had 17 Barbies.   It took my daughter and I the entire three weeks but we made every single Barbie a bikini.  Of course several of the 17 Barbies were Disney Princesses (my granddaughter loves the Princesses).  So around her Barbie pool, you can see Snow White, Cinderella or Ariel in an awesome bikini! 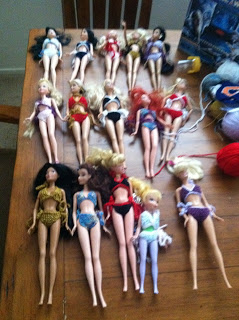 Here are 15 of the bikini clad Barbies and Princesses!   My granddaughter was playing with the other two.    Look, even Tinkerbell can swim or sunbath.

When crocheting Barbieclothes, what size yarn are you using?

I used a standard knitting yard. I do need to update this will the exact weight.

Oh how cute!! Thanks

Now that's a lot of bikinis!!! So cool!!! I bet your grand-daughter loved them.

How cool! My daughter would go crazy for swimsuits for her barbies!! Thanks so much for sharing

Love this! I designed clothes for my barbies throughout my childhood and I never thought of a bikini! I may just have to break out one of my old barbies and try this!

Thanks for your sweet words, I'm following you now too!