Skip to Content
By Kristi-
Mom invited me to write another post and I thought
would be fun to tackle Valentine’s Day
These trifles are actually smaller versions of my larger Raspberry
Trifle that I often make at Thanksgiving or Christmas. It’s always a family
favorite, but by reducing the recipe and using a smaller trifle dish, they
become a sweet, romantic Valentine’s dessert. 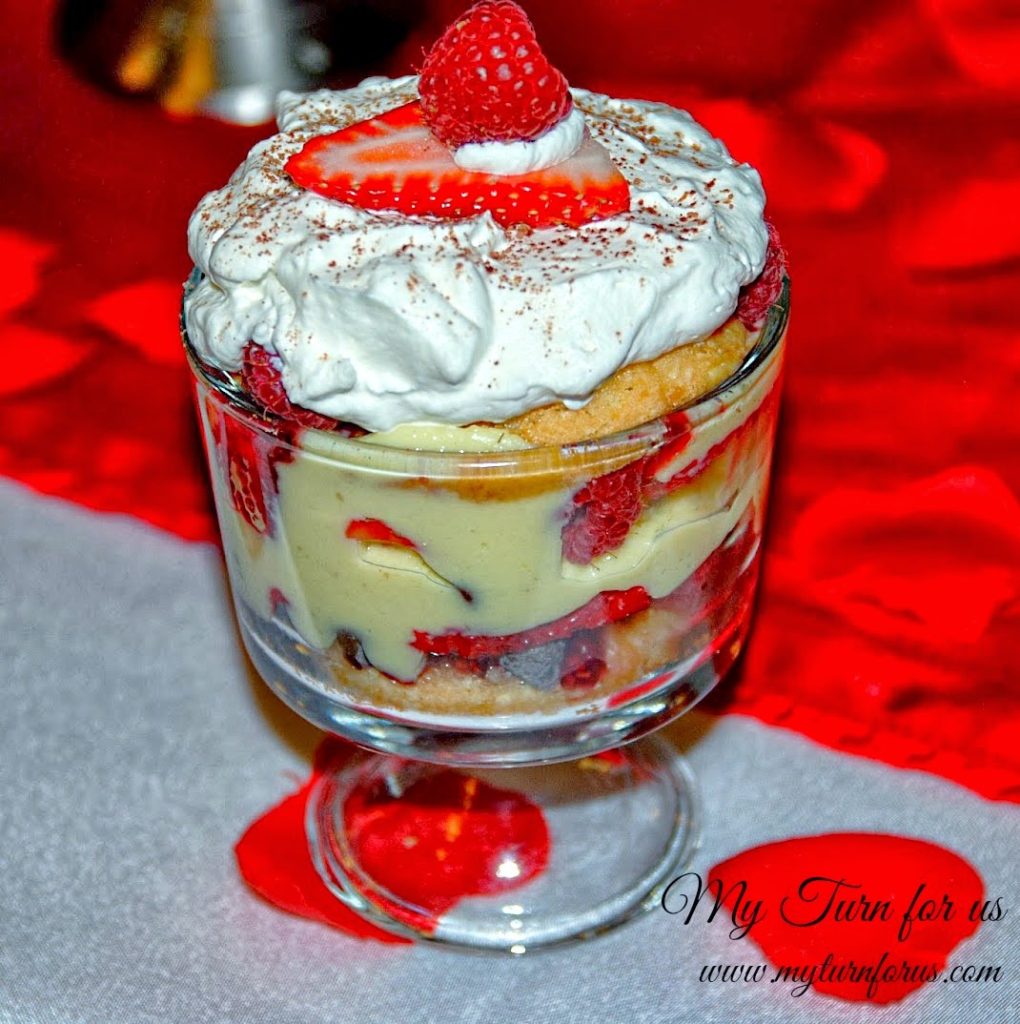 One warning…this recipe takes some time. It is sooo worth
it, but it’s not for the faint of heart!

1/2 stick butter
1/2 cup sugar
1 egg at room temperature
3/4 cup flour
1/8 tsp baking powder
1/8 tsp baking soda
1/4 tsp salt
About 1/4 cup buttermilk at room temperature
1/8 tsp vanilla
1/8 tsp almond extract
Preheat the oven to 350 degrees. Grease and flour the baking
pan(s).
Cream the butter and granulated sugar in the bowl of an
electric mixer fitted with the paddle attachment for about 5 minutes or until
light and fluffy. With the mixer on medium speed beat in the egg. (If making
the larger trifle, beat the eggs in 1 at a time).
In a large bowl, sift together the flour, baking powder,
baking soda, and salt. In another bowl, combine the buttermilk, vanilla, and
almond extract. Add the flour and buttermilk mixtures alternately to the
batter, beginning and ending with the flour. Divide the batter evenly between
4-5 muffin cups (or for the larger trifle, between 2 loaf pans). Bake the
muffins for 20-25 min, or until the toothpick comes out clean. (For the larger
trifle, bake the pound cake loaves 35 min – 1 hour).
When cakes are done, let them cool for 10 minutes. Take them
out of the pans and place them on  a
baking rack to cool completely.

For the Almond Cream:

¾ cup milk
3 egg yolks at room temperature
¼ cup sugar
1 Tbsp sifted cornstarch
¼ tsp vanilla
½ tsp almond
½  Tbsp butter
¼ Tbsp cream
Heat the milk in a stainless steel saucepan over medium heat
and bring almost to a boil. Remove from the heat.
Beat the egg yolks and sugar on medium-high speed in the
bowl of an electric mixer fitted with the paddle attachment until pale and
thick. With the mixer on low speed, sprinkle on the cornstarch. Beat on medium
low speed until combined, scraping down the bowl with a rubber spatula.
With the mixer on low speed, slowly pour the hot milk into
the egg mixture, until just mixed. Turn off the mixer and return the mixture to
the saucepan. Cook over low heat, stirring constantly with a wisk, until the
mixture thickens, about 5-7 minutes. Watch closely becomes once it thickens, if
left on the heat, it will quickly turn into scrambled eggs.
Immediately remove the mixture from the heat and pour
through a fine sieve into a glass bowl. Stir in the vanilla, almond extract and
heavy cream. Cover with plastic wrap and refrigerate until cold and thick, like
custard.
Cut the pound cake into ½ inch thick slices and spread 1
side of the slices with the raspberry jam (be sure to use all of the jam). Set
aside
Place a layer a layer of cake, jam side up, in the bottom of
the trifle dishes, cutting the pieces to fit and cover the entire bottom of the
dish. Sprinkle with some of the chocolate chunks. Top with a layer of
raspberries and strawberries. Then top with a layer of the Almond cream. Repeat
the layers once. Then top with a layer of cake, jam side down, followed by
another layer of raspberries and strawberries.
Whip the heavy cream in the bowl of an electric mixer fitted
with the wisk attachment. When it starts to thicken, add sugar, vanilla, and
almond extract. Continue to whip until it forms stiff peaks. Decorate the top
of the trifles with whipped cream, fresh berries, and then sprinkle with cocoa
powder. (For those of you interested in using this recipe for the full size
trifle, just quadruple all ingredients, including those for Almond cream and
Pound Cake).
Finally, get a babysitter and enjoy with your sweetheart with
a glass of champagne!! 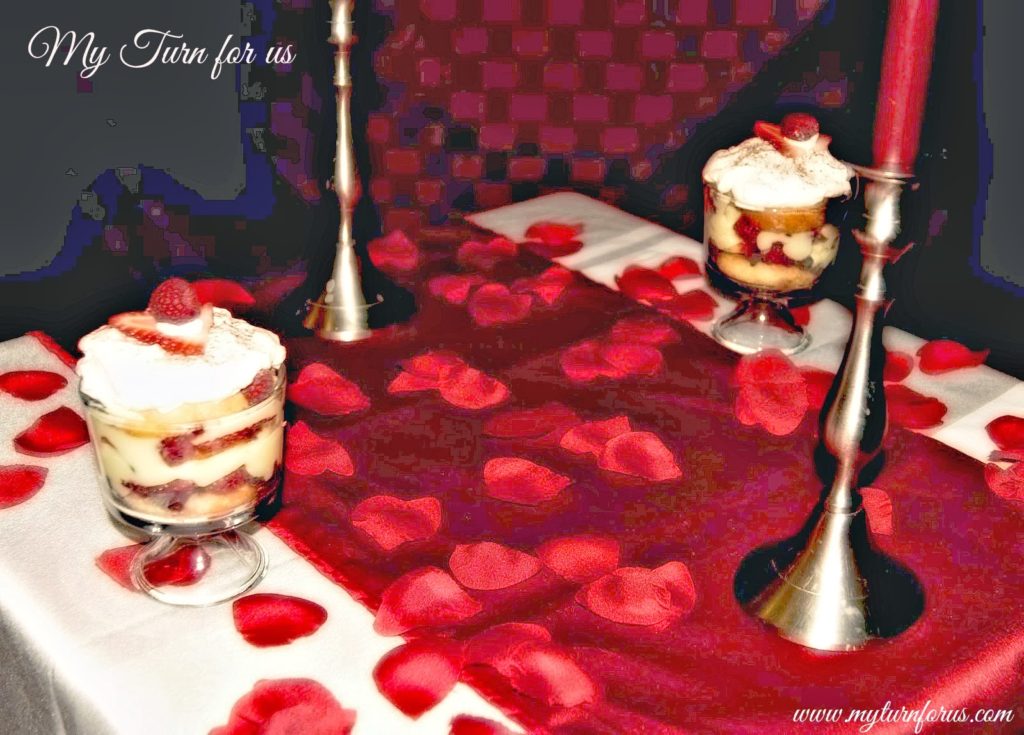 Savvy Southern Style
And Sharing at these sweet parties!

I prefer them as individual trifles, they are so cute when they are small. :) Thank you so much for sharing with us at Best of the Weekend. Pinned to our party board!!

A Day in Candiland

Thanks for sharing this recipe, it looks wonderful

Thanks for linking up to our Foodie Friends Friday Valentine's Party and I hope you will join us at our Snack Food party this week.

This sounds great! I have been craving something like this! Thanks for sharing at The Weekend Retreat, hope tosee you back on Thursday!

Oh my gosh! So many wonderful flavors together...raspberries, strawberries, almond cream, chocolate.Thank you Kristi and Evelyn for sharing this treat!