Baked jacket potatoes recipe that makes the most amazing seasoned baked potatoes. See these easy steps on how do you bake a potato to make a crispy skin baked potato. 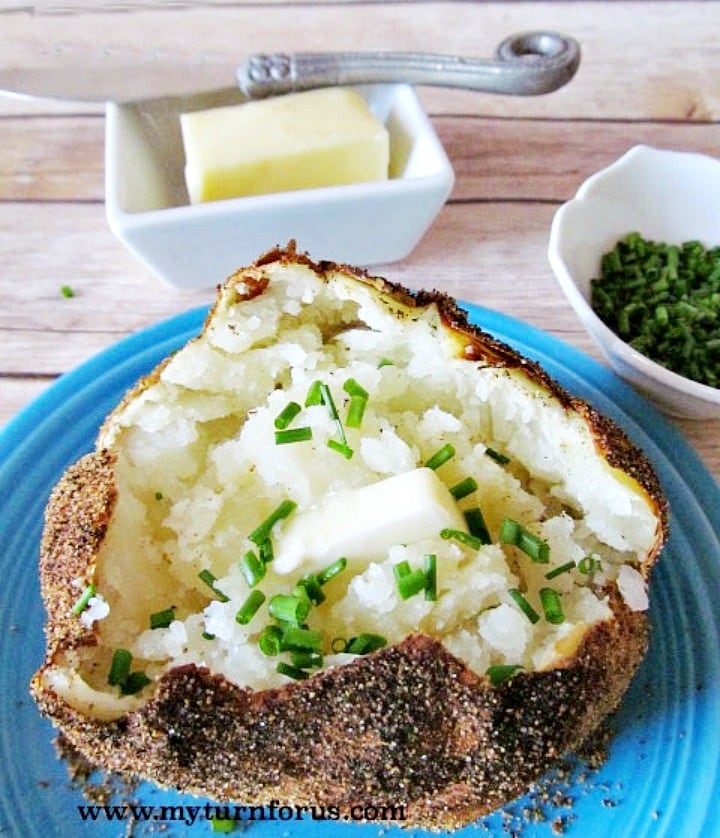 This is my all-time very favorite baked potato, in fact, we do not have baked potatoes any other way.    It has so much flavor and I even eat the peel, which I never do in restaurants.   It just takes a little planning ahead to have the best baked potato or best jacket potato and that’s it.   Ok, that’s not it, it involves a simple salted brine and a little patience.   But you will be glad you took the time. 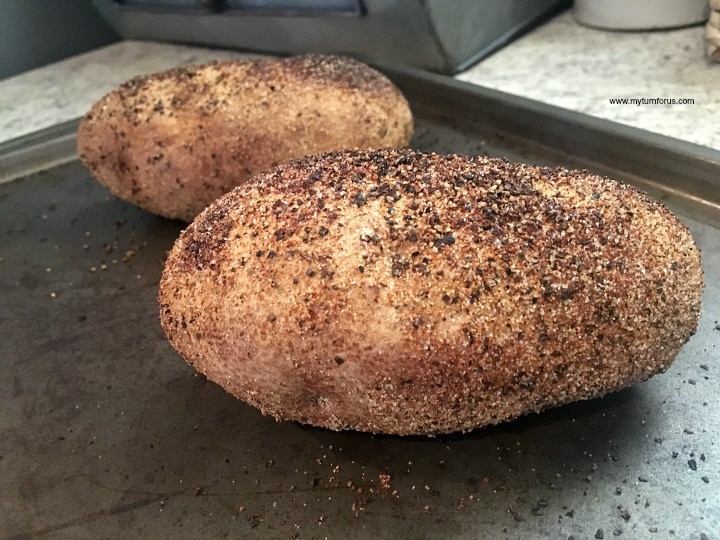 What is a Jacket Potato?

It is a potato that has been baked with crispy skin but is still moist and fluffy inside.  Any baked potato can have that moist fluffy interior but it takes a few tricks to obtain that crisp skin.   But by adding a few steps, you too can produce the best jacket potato.

How do bake a Jacket Potato:

We do love them but not a throw it in the microwave baked potato. But one that comes out of the oven with seasoned skin and fluffy on the inside   But if you really wish to have a delicious seasoned baked potato, the oven has to come into play.   We set our oven temperature at 425 degrees F and bake our jacket potatoes for about 60 minutes checking the last 10 minutes or so.

What are some Jacket Potato Toppings:

How to do make Seasoned Baked Potatoes:

We wish for our seasoned potatoes to have that crisp skin of a jacket potato.  So we have to season it without breaking the skin.     We do two things, first, we place our potatoes in a brine of salt and water and second we roll them in a mixture of seasonings such as black pepper, seasoned salt, and garlic powder.

Start your baked jacket potatoes by choosing two large russet potatoes.   Using a potato scrubber or scrub brush, scrub them under running water until very clean.    Place in a large bowl or pot, the container should be deep enough to cover them with water. 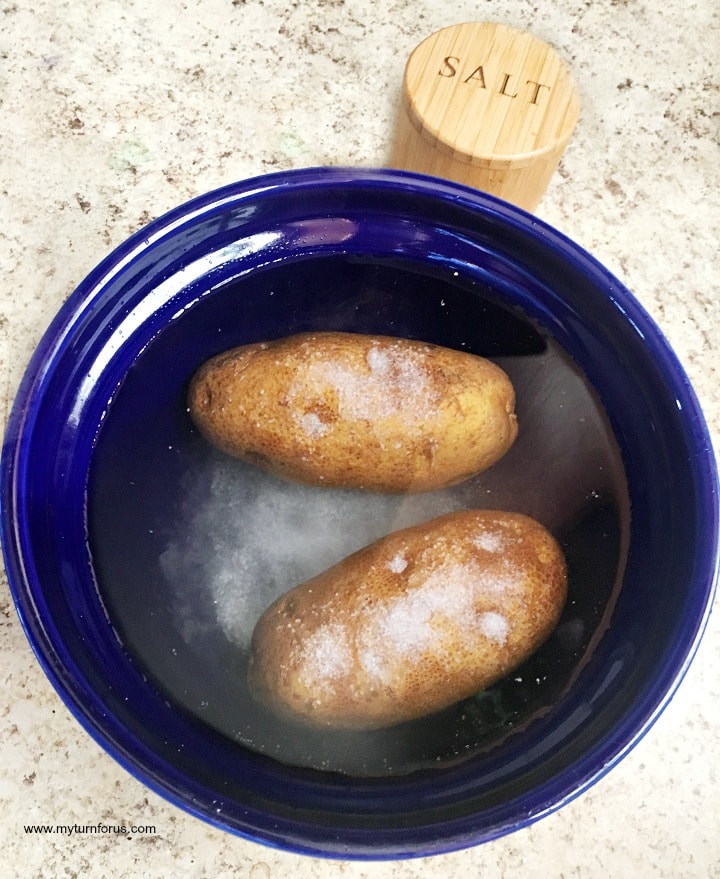 Completely cover them with water and sprinkle in 1/4 cup of kosher salt.  Stir to combine and allow to brine for at least 4 hours. 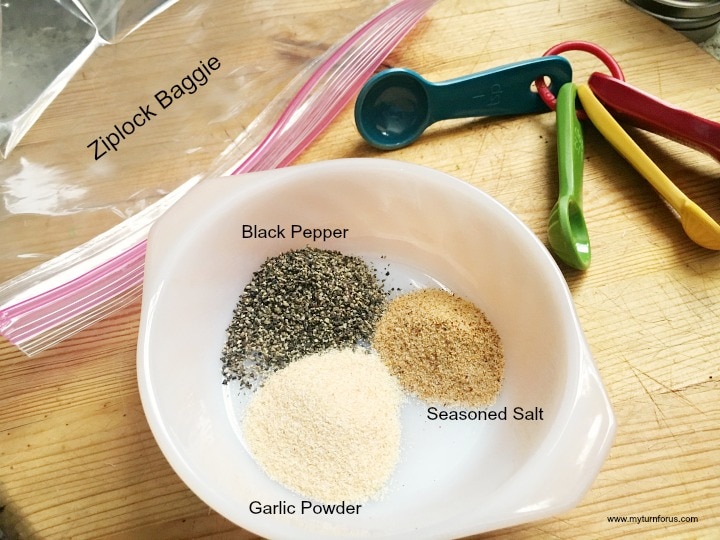 While potatoes are brining measure out 1 teaspoon each of garlic powder, seasoned salt, and freshly ground black pepper.  Pour into a gallon-size ziplock baggie, seal and shake to mix thoroughly. 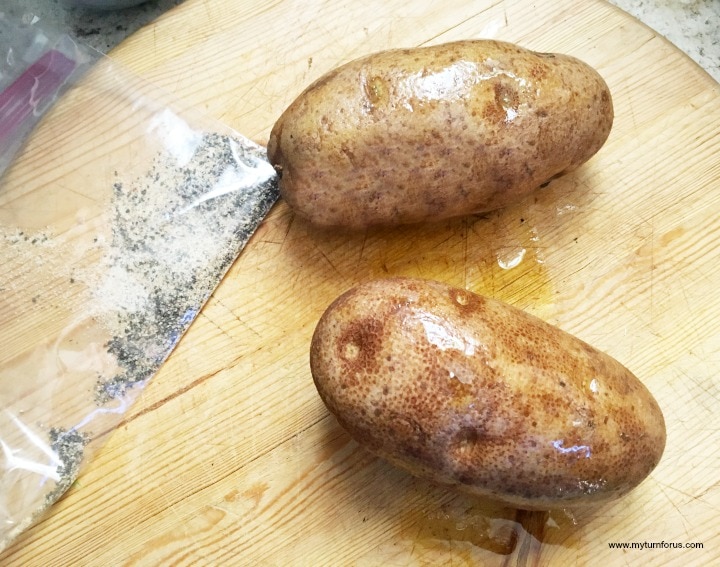 Remove the potatoes from the brine and pat dry with paper towels.   Do not puncture any holes in them because we wish to keep all the steam and moisture in these baked jacket potatoes.  Rub the outside with olive oil and place them  inside the ziplock bag and seal. 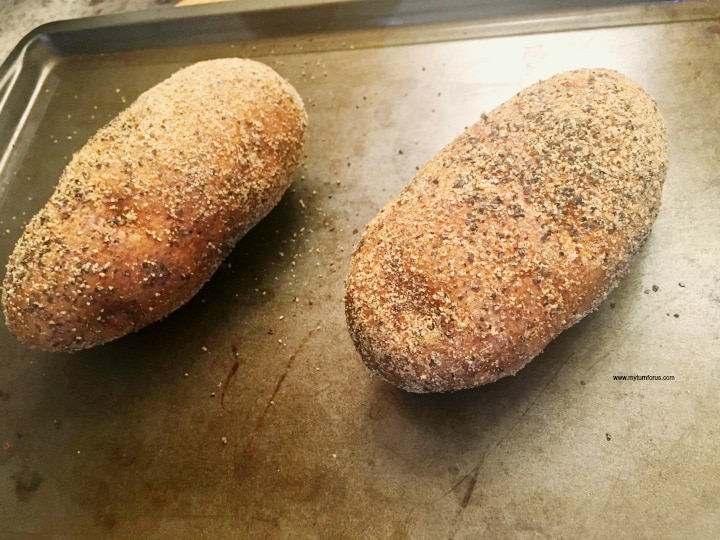 Shake the bag making sure the skins are completely covered with the seasonings.   Place them on a baking sheet and bake in preheated 425-degree F.  oven for about 60 minutes. 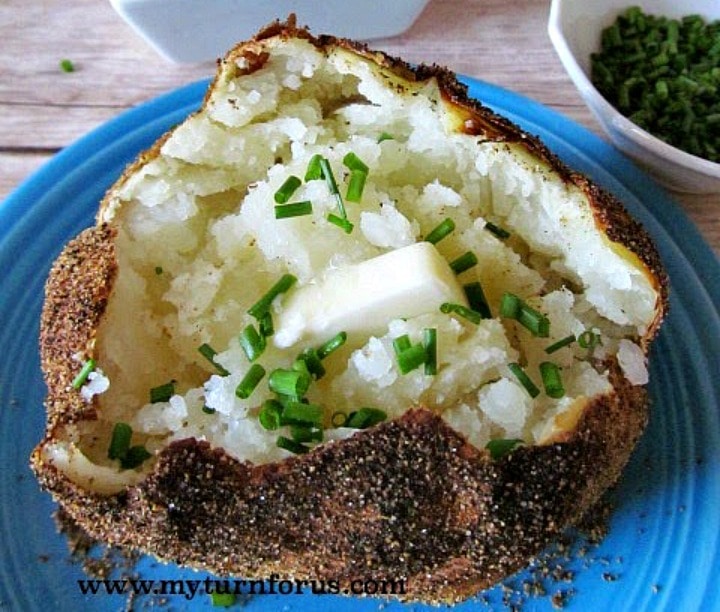 These potatoes have seasoned skins that are crispy but it’s still moist and fluffy inside.  Serve them with plenty of butter, sour cream and chives or any other toppings you choose.  Enjoy!!

Other ways to enjoy these spuds: 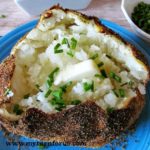 Love the way they turn out. Have passed the recipe to my sister who now also only does potatoes like this

Thank you so much for your sweet comment. We love it!

I always puncture my potatoes, I never realized that it is better not to. I never thought of soaking them in a brine either. Thanks for the tips

Thanks for sharing these awesome potatoes.

We loved baked potatoes in our house - hubs is hooked on them. I make the same way in the oven, no hole poking in this house. But I have never added the garlic, will give it a try!